A Banksy artwork has sold for a record price at Southeby’s auction house on 3rd October 2019. His monumental depiction of the House of Commons overrun with parliamentary primates sold for £9,879,500 ($12,200,000) after a 13 minute bidding battle.
Having been on display in Bristol since March 2019, through a generous collaboration between the painting owner, Banksy and the Bristol Museum, it was removed in September 2019 in preparation for the auction. 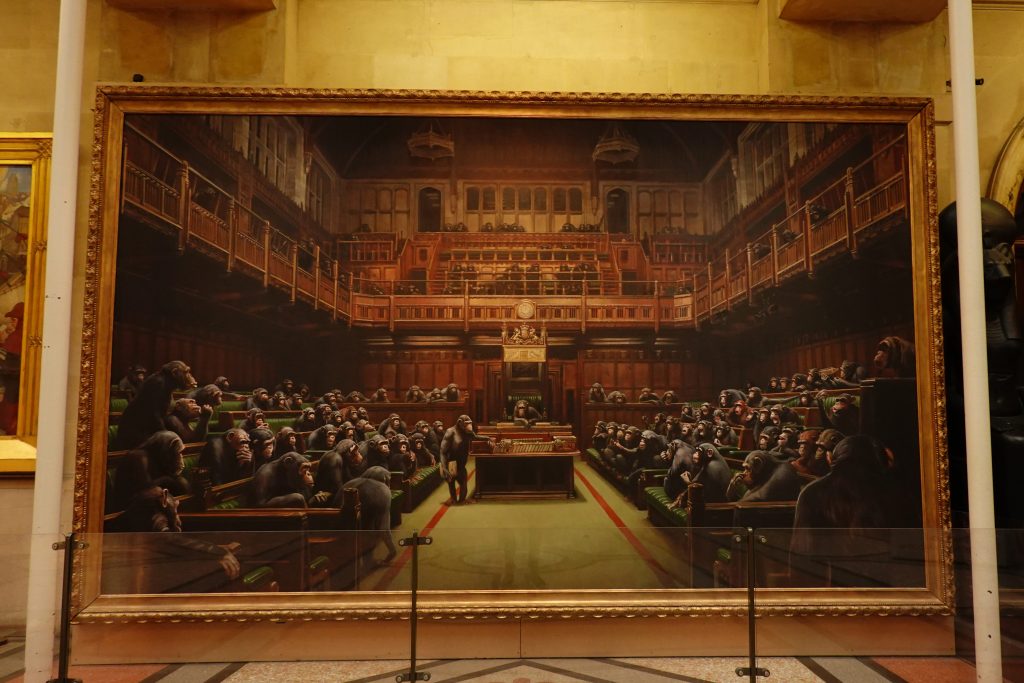 This final sale price exceeded by far the auction house estimate of £1,500,000 to £2,000,000 but also the artist’s last record sale which was achieved with the painting “Keep it Spotless”, in 2008 in New York, a Damien Hirst spot painting, updated by Banksy with a spray-painted hotel maid, which sold for $1,870,000.

The piece was originally created as part of the ‘Banksy versus Bristol Museum’ exhibition in 2009, and was then titled ‘Question Time’.
It was back on display in Bristol 10 years later, in March 2019, to mark the first missed Brexit deadline, with a few tweaks by the artist (the House of Commons lamps turned off and a banana held by a chimp turned upside down amongst other details) and a new title ‘Devolved Parliament’.
The art of Banksy has always been relateable and timely and this piece is no exception. Although Banksy painted his Chimp MPs a decade ago, the ‘Devolved Parliament’ seems more pertinent than ever in the current political climate, after months upon months of Brexit deadlock and endless chat.
wtw2019_admin2019-11-11T15:00:31+00:00November 11th, 2019|Uncategorized|